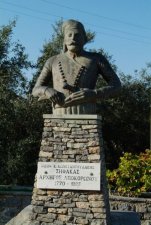 Sifakas, who gave his name to the knives' street, was a great fighter in the Revolution of 1821 in Crete, and a member of "Filiki Eteria" (the secret organisation which began the Revolution). His real name was Sifis Konstantoudakis, but he became known as Sifakas because of his physique, his thunderous voice and his personality. Sifakas was born in 1770 in Melidoni.

A great fighter, first in battles against the Turks, among the courageous chieftains during the Revolution of 1821, alongside his brothers, Sifakas was a protagonist and victor of many battles. He became known for his courage, bravery and patriotism, and was honored with the degree of Pentakosiarchos, meaning "ruler of 500 soldiers".

In early 1823, Sifakas was sent to Kissamos to observe and combat the hostile movements of the Turks. There he defeated and routed the enemies, who had made a surprise attack from the district of Selino and had massacred the Christians in the village of Pervolakia.

While in Kissamos, Sifakas fell ill with pneumonia, and he died on 23rd March 1823 after 13 days of illness, aged 52. He was buried with great honours at a large public funeral at Gonia Monastery in Kolimbari, following a decision of the Provisional Administration of Crete.

Created and designed by aera.gr online 2015