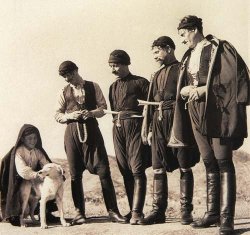 An integral part of the Cretan traditional costume, the knife was a favorite, not only as a useful tool, but also as an honoured weapon during the difficult times in Crete.

Since the Minoan era, the knife was a symbol of bravery. Evidence for this has been found in excavations around the island. There is written evidence of the use of the knife for military purposes in the Middle Ages, especially during the Revolution of Psaromiligkoi, a noble family, in the 14th century. The knife retains its ancient significance in the modern day.

During the Ottoman era, from 1669, the art of making knives experienced a boom in Chania. The first artisans were Turks, but soon Cretan artisans appeared who became specialised and created exceptional examples of their art.

Chania knife artisans (Maherades) settled right next to the ancient ruins, in the small moat that used to separate Kastelli from the rest of the city, which appears to have been maintained during the Ottoman rule. Before the German bombing during the Second World War, the two levels of the road reached up to Daskalogianni Street.

The Cretan knife became famous not only in Crete itself, but also in the rest of Greece and in distant foreign countries. There are still a few younger craftsmen who have retained the art and artistry of construction of the handmade traditional Cretan knife and work with authentic traditional techniques and tools.

Sifakas Street was and remains the historic road of knife craftsmen in the city, which is why it is also known locally as Maheradika ("knife makers' workshops").

Created and designed by aera.gr online 2015